Listed on the NSA Evaluated Products List, delivers complete erasure of top-secret data on hard drive and tape in 15 seconds.

High-speed with 10,000+ Gauss in 7 seconds, ensures no data can be recovered from hard drives and tape.

Simplify degaussing and destruction by creating a secure, self-contained workstation.

Self-Contained Workstations for Degaussing and Destruction

Eliminate the security risks, planning, and cost of transporting sensitive electronic media by taking your degaussing and destruction equipment to the data site.

Eliminate the security risks, planning, and cost of transporting sensitive electronic media by taking your degaussing and destruction equipment to the data site.

Hard drive shredding is the physical destruction of hard drives.  A hard drive shredder mangles the hard drives in such a manner that thieves will be less inclined to attempt to retrieve the data contained on the shredded remnants.  The common misconception is that shredding media renders the data impervious to recovery. However, it is well recognized that shredding or physically destroying the media does not remove the data from the hard drive disk platters.  Because the data remains on a shredded hard drive, the National Security Administration (NSA) requires all media to be purged or degaussed before the media is released for shredding or destruction.

Degaussing is the process of exposing the medial to a strong magnetic field to completely eliminate all data from working and non-working hard drives and tape.  Hard drives are rendered unusable after being degaussed.

The NSA requires hard drives be shred to 2 mm particles.  Shredding to 2x2 mm particles has limitations as the equipment necessary to shred a HDD is at minimum the size of a cement truck and it must have a negative pressure vacuum system to contain the dust particles which at this size are toxic.  A HDD is made of a number of materials including steel, aluminum, various plastics, gold, copper, etc.  Dust sized particles would extremely hazardous to breathe.

Shredding requires utilizing a third-party vendor to transport the media from its secure location to the site of the shredding equipment.  To eliminate the chances of a data breach during transport, the NSA requires all media to first be degaussed before leaving its secure facility and being handed over to a third party shredding vendor.

Moral:  Degauss before you shred.

The magnetic field created, both the ‘remember where the data  is’ and the actual data itself, has a strength.  That strength, or technically, the field’s resistance to being erased, is measured in units of Oersted and is called the coercivity of the field.  Modern storage media have coercivity of about 5,000 oe.

To eradicate that magnetic field, that is the data, you apply a stronger magnetic force.  One gauss effectively kills one Oersted.  To eliminate the data you apply a force measured in gauss, that eliminates the data/field.  Modern degaussers apply a minimum of 10,000 gauss in either a magnetic pulse, or through a permanent rare earth magnet.

This degaussing process eliminates the original magnetic field that was the data, rendering the information unrecoverable through even the most advanced forensic means.

How to Erase a Hard Drive

Technically the word erase in this context means to “remove” recorded matter from a magnetic medium, or to “delete” from computer storage, per Merriam-Webster.   As a matter of industry practice the word ‘erasure’ has come to mean overwriting in the media disposition industry.

Overwriting is a method where a random pattern of usually ‘1’ and ‘0’ is written to every part of the drive, frequently three times, to obliterate the underlying data.  The advantage of this method is the drive can be re-used, and for most practical purposes the original data is not recoverable.  The disadvantages of this method are: it takes a skilled operator to ensure that the overwriting is done correctly for a given manufacturer and version of the drive; it takes a considerable amount of time-hours, and therefore electricity to do; and it is not regarded as failsafe, or permissible for the highest data security standards such as the NSA, CIA, or DoD.

In a broader context of the word erasure, there are other ways to remove the data from a magnetic device, or to make it inaccessible.  Many entities encrypt their data, and then you only have to destroy the key to the algorithm, and the data cannot (theoretically) be recovered, making it inaccessible.

Another permutation is Secure Erase, which is an overwriting protocol that is built into some drives at the factory and is supposed to work like an external overwriting program mentioned above.  In theory, using the factory installed Secure Erase function alleviates the need for a specially trained technician to match the program to the drive/version; in practice about a quarter of Secure Erase programs have proven to be faulty and drives were released with data intact.

The optimal solution is to degauss the magnetic storage device as degaussing eliminates the data-there is nothing to recover as the magnetic field that was the data, simply no longer exists. This renders the drive un-useable as all the track and sector information is gone as well.

If you’re not ready to purchase equipment, have a short-term need, or want to test our equipment before buying, our rental program offers a flexible and affordable option. Rentals are available on a weekly basis for tape and hard degaussers and physical destroyers, including:
View PDF Brochure

We also offer rental on two of our popular mobility packages that allow you to eliminate the security risk of transporting sensitive electronic media by taking erasure and destruction equipment to the data.

Talk to us to learn how you can rent our industry-leading degaussers, destroyers, and mobility packages. Call us at 800-624-1903.  We’ll be happy to answer your questions and provide you with a complete pricing quote custom tailored to your job.

State-of-the-Art On-Site Data Destruction Service –Our mobile data destruction team brings degaussing and destruction to you.  No break in the chain-of-custody.  We ensure sensitive data doesn’t leave your building and fall into the wrong hands by rolling our portable equipment into your facility to the data.

NAID AAA certification means our team has been background checked, drug screened and expertly trained to properly dispose of all data on hard drives and solid-state media, including flash, compact flash, and USB thumb drives, as well as the controller boards of hybrid-drive systems.

Thorough – Eliminates all data from your media, keeping you safe from potential security breaches and legal complications. We furnish an electronically generated NIST-compliant erasure and destruction report for each job.

Cost Effective – Provides the most secure data elimination for a fraction of the cost of other methods.

Compliant – Eliminates chain-of-custody issues, while helping you satisfy the most stringent government and industry standards, including:

An increasing number of government regulations, industry standards, and internal risk mitigation policies require organizations to sanitize storage media prior to disposal or reuse. Though specific requirements vary, the goal is the same—to ensure the data contained on storage media cannot be recovered using any method.

At Garner, we manufacture and sell hard drive degaussers and physical destroyers specifically designed to help you eliminate the risk of data theft and meet the standards that govern your organization’s operations. The chart below lists the most common government and industry standards for sanitizing magnetic tapes and hard drives with links to the Garner Product models that help you comply. Compliance Chart PDF 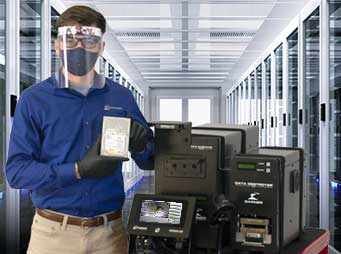 Every organization needs to erase, destroy, and verify data-storage media before disposal, but not everyone needs equipment on hand for the task. We provide on-site services at your location and automatically generate documentation of each piece of media as we degauss and destroy your end-of-life media for your IT asset disposal archives. 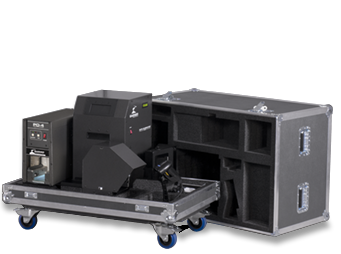 For those who have a short-time need or want to try out equipment before purchasing, our equipment rental program provides an easy and affordable alternative. 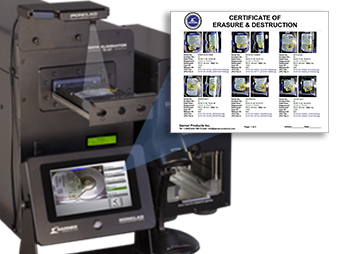 An increasing number of government regulations, industry standards, and internal risk mitigation policies require organizations to sanitize storage media prior to disposal or reuse. We manufacture and sell hard drive degaussers, physical destroyers, and verification systems specifically designed to help you eliminate the risk of a data breach and meet the standards that govern your organization’s operations.

We have worked for more than half a century designing and improving our line of degaussers and destroyers. Our products have been tested and certified by independent labs to meet safety and electromagnetic emissions standards worldwide. And while designing, manufacturing, and selling high-quality products is our primary objective, our exemplary customer support also sets us apart. Our global technical support team and more than 250 dealers and distributors serve customers around the world. No matter where you are, we’re here to talk to you, in your language, during your business hours.

Find out more about Garner Products

“DriveSavers Data Recovery has completed the testing of the Garner HD-2 Degausser and HD-3WXL Degausser…Both the HD-2 and HD-3 WXL degaussers were successful in destroying the media and magnetic property as well as the head stacks. All attempts to recover the degaussed drive have failed. The HD-2 and HD-3WXL are solid products and both successfully performed as expected.” Michael Hall, CISO of DriveSavers Data Recovery, Inc.